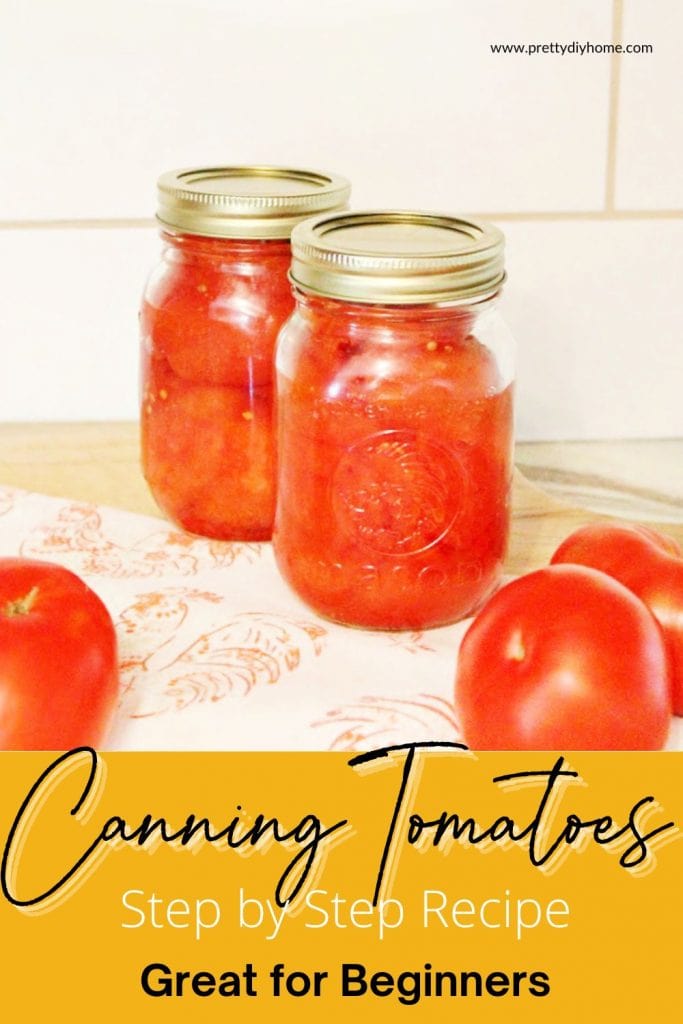 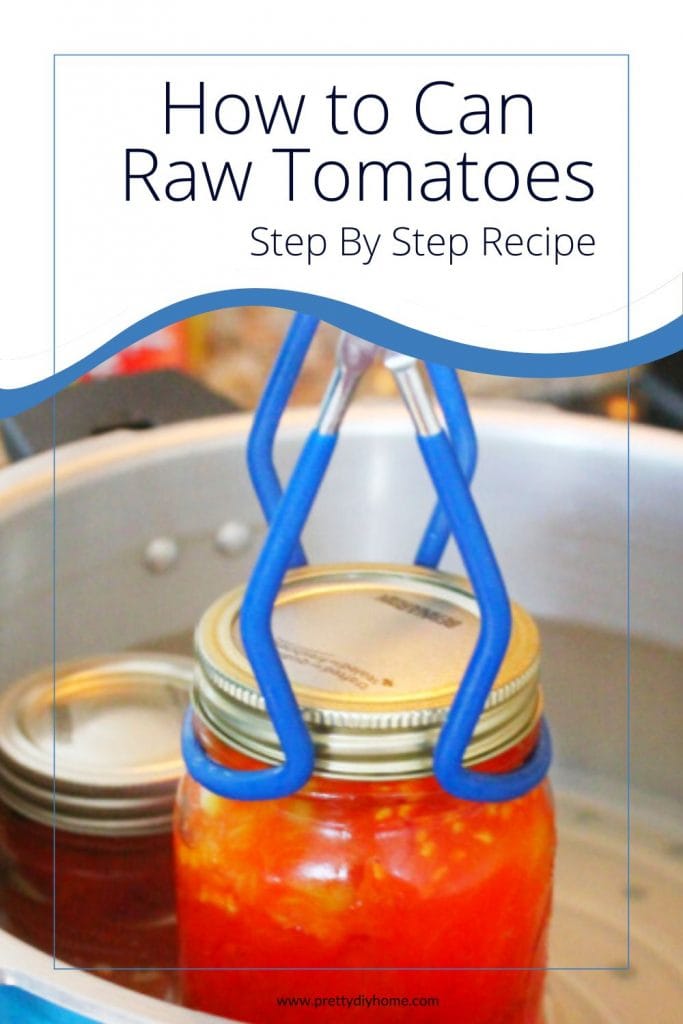 There are two major types of canned tomatoes, canning tomatoes fresh and whole sometime called raw packing which is what I am about to show you, and stewed tomatoes which are cut and cooked before canning. I prefer to raw pack when canning tomatoes.

Canning tomatoes does not take any special skills but it does have several steps. If your new to canning this post is perfect for you, as I will go through each and every step, with a couple of my Grama hints.

Its very difficult to give a recipe ingredient list with amounts, as the amount of tomatoes you have will dictate how many jars you end up with. We used.

This grama does not use lemon juice, for many generations it was not put in tomatoes, but I see it in more modern recipes because it adds acidity. You can add 1 tbsp of lemon juice to each pint if you want, but I don’t do it.

There are four ways to sterilize jars, in the oven, dishwasher, microwave and stove top. The method I choose depends on how many jars I need to sterilize. For this amount of canning I suggest just stove stop sterilizing them.

Wash and rinse your canning jar thoroughly. Take a very large pot, and fill it with hot ( not boiling) water. Place the jars open side up into the pot. Fill the pot with enough water to cover the jars plus one inch. If you have enough room you can place the rings and jar lids in the same pot, if not place them in a second pot and boil like the jars.

Let the water come to a boil and boil continuously for ten minutes. Then turn the heat down to a simmer keeping the jars to stay hot in the water while you prepare the tomatoes.

To can tomatoes you have to peel that tough thin skin off first, but don’t use a knife. Instead we will blanch the tomatoes in hot water, and then peel the skins off. Here is what I mean.

Begin by making sure all your tomatoes are washed and clean.

Place a large pot of water on to boil. Once the water is boiling add your tomatoes a few at a time and let cook until you see the skins start to peel away, it takes about 9 minutes or so.

Once the skins have started to recede away from the tomatoes using a large spoon transfer the tomatoes to a sink full of very cold water.

The cold water helps the skin to pull away AND cools the tomato enough to handle. Using your fingers or a knife tear away the very thin skin.

Here is a very quick video showing how easy it is to peel the tomatoes.

Cut out the little stem piece. Place in a large bowl and repeat until all your tomatoes are peeled.

Filling the Canning Jars with Tomatoes

Place the whole tomatoes into each jar, pushing them down as much as possible, pressing the tomatoes down fills the spaces with juice. You may find air pockets in the bottom of your jar, use a knife around the side of the jar to release it.

If your jar isn’t full enough, you can cut a tomato in half to get your jar full enough. Do NOT add water inside the jar, it will ruin your recipe.

Add 1/2 tsp of pickling salt to each pint jar of tomatoes.

Wipe the ring of the jar clean, attach the sterilized lid and ring. Finger tighten.

How to Can Tomatoes

There are two ways to can tomatoes, waterbath or pressure cooking. As tomatoes have quite a bit of acid they are perfect for canning using a waterbath. If your new to canning I suggest starting with a waterbath, they are Much cheaper to buy and less intimidating as they aren’t pressured. (I canned for several years before ever buying a pressure cooker.)

Fill the waterbath half full with warm water. Place on the stove burner, place the jars in the waterbath, and enough warm water to submerge the jars plus one inch. Turn the heat high on until the water boils. Once the water is boiling reduce your heat a little bit, but make sure the water continues to boil. Cook your tomatoes for 85 minutes.

Altitude can affect how long you need to process your tomatoes here is a handy guide for timing.

We own a pressure canner so we used it instead of a waterbath. Always read your canners manual for the spec of your pressure cooker. We pressure can the tomatoes to 15lbs pressure, check the directions that came with your canner your location and altitude can effect how much pressure needed. You can also refer to the link above.

Place the rack in the bottom of the canner and fill half way with warm water.

Seat the jars on rack in canner, its okay if the jars touch. Fill the canner with enough water so that the jars are submerged plus one inch. Close the canner.

With the pressure control weigh off heat on high until steam comes out of the vent tub. let the stem vent for ten minutes. Then place the weights on using an oven mitt because of the steam.

When the weights jiggle vigorously, reduce the heat so that the weights rock gently. Continue boiling for 15 minutes, then remove from heat.

Let the pressure cannersit until the seal releases before carefully removing the lid.

Be cautious removing that lid. The steam can cause severe burning.

Transfer your jars to a soft surface like a towel on a cookie sheet, or cutting board. Using either a oven mitt or a jar lifter, the boiling water and jars are still very hot.

Let the jars cool completely without moving them. You should hear them “pop” as they seal. If any of the jars don’t seal place in the fridge and eat within a couple of days.

Some Other Canning Recipes to Try!

Homemade Dill Pickles are the easiest canning recipe I know of, and pretty much everyone eats them on sandwiches or hamburgers. We make them every year and every year we run out.

Apple butter is thicker than apple sauce and you can use it on toast, waffles, pancakes or as a glaze on pork and ham. You don’t need to peel apples to make this recipe, and you can use crab apples if you have access to them.