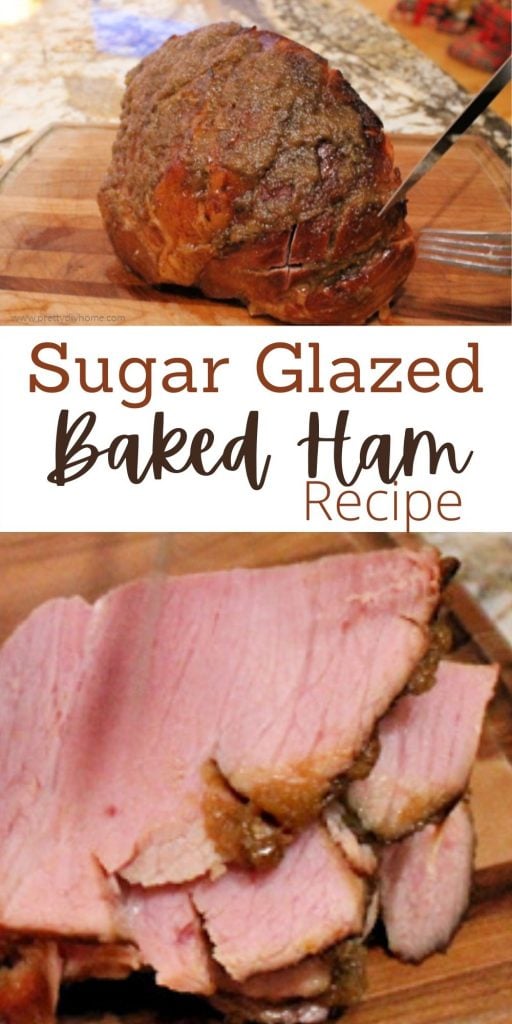 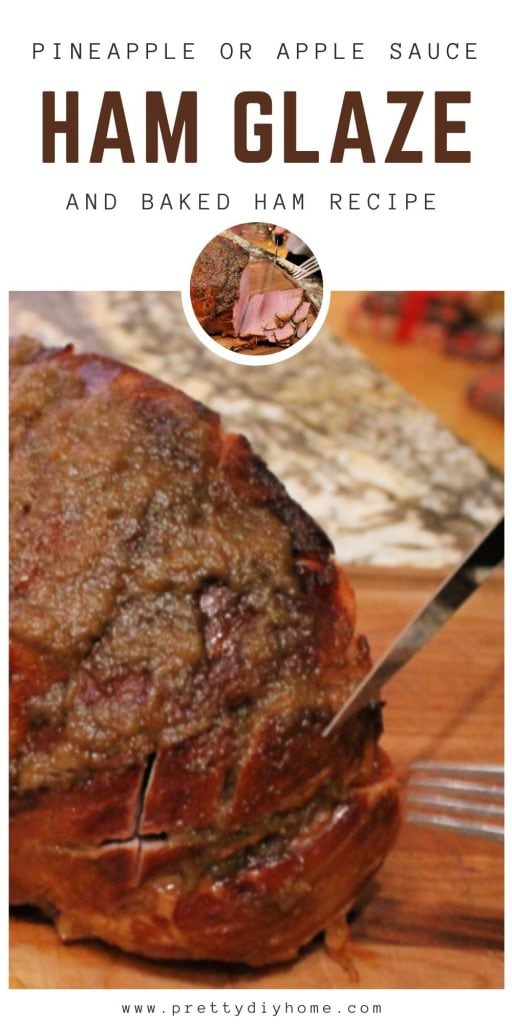 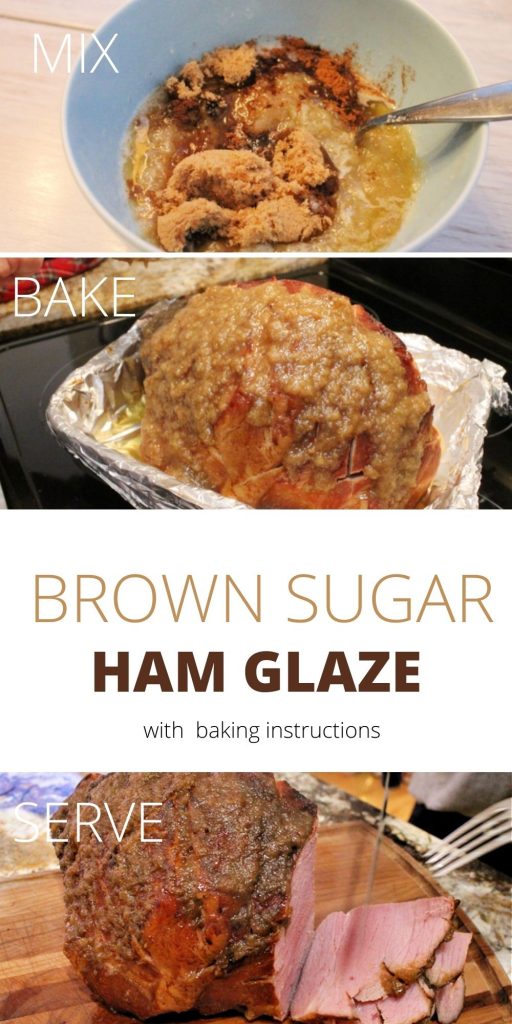 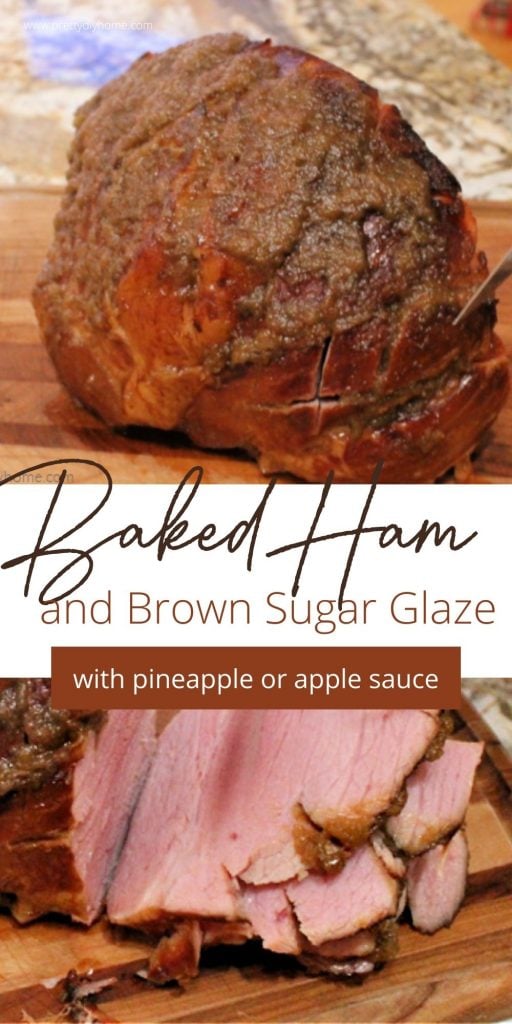 Glazed ham is one of the best holiday or big gathering meals. And, nothing makes a ham more delicious that a tangy sweet brown sugar glaze coating. This glazed ham recipe features a simple brown sugar glaze that can be made with either pineapple or apple. The simple brown sugar glaze recipe whisks up in minutes. Go ahead and make the ham glaze with classic pineapple if thats what your looking for. But if your wanting something a bit different switch the pineapple for apple sauce. Either way this is a recipe special enough for holidays, but without the fuss.

The ingredients for this Glazed Ham recipe is made with items we usually have on hand.

Baking a Ham – How Long to Cook Bone In Ham

Preheat oven to 350 F. Line pan with tin foil, place the ham in pan with the fat edge on top. Slice the top of the ham about 3/4 of an inch deep in a criss cross pattern (diamond shaped). Cover with tin foil, seal by pinching the edges of the foil to the roasting pan, place in oven and let bake.

The cooking time for ham depends on the size of your ham and the type of ham you chose. For this recipe I used a smoked ham with the bone in (from Costco). A fresh uncooked ham will take longer.

Here are some general guides for you.

When your ham is almost done, make the brown sugar glaze. In a small bowl, melt the butter in the microwave. Add the pineapple (or apple sauce), brown sugar and spices. Mix until blended, and set aside until the ham is close to cooked. How easy is that!

Half an hour before serving, remove the baked ham from the oven.

Cover with the brown sugar glaze, making sure the glaze goes down into the diamond slits you cut into the top of the ham.

Place the ham back in oven uncovered until the glaze is browned, about 15 minutes.

Let the ham cool for 10 minutes, then slice and serve.

If you happen to have leftovers from your large baked ham, you can freeze and use them in a variety of ways. Glazed ham will keep in the fridge for up to a week for sandwiches. Try frying it for breakfast, or placing it in a bun with apple sauce on top. So good.

To freeze glazed ham, wrap in parchment paper, and place in a freezer bag marked with the date.

You can store baked it in the freezer for up to two months. Just defrost in the microwave or the fridge when ready to use.

Pin this Recipe so you have it to try later! 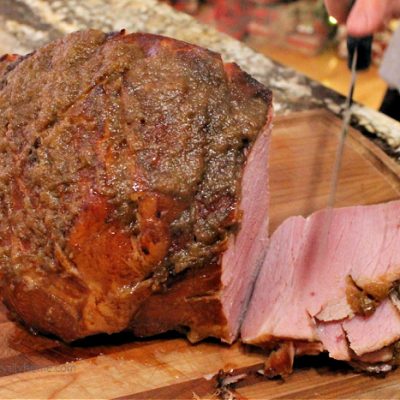 A Glazed Ham Recipe with a Simple Brown Sugar Glaze

Recipes that Go with Ham

I have not written lots of cooking recipes yet, but I do have two recipes that I serve with glazed ham. Both of these recipes make large amounts so that you can feed a crowd easily. I am certain you will like them.

This is a no fail recipe for scalloped potatoes and its often paired with glazed ham as you can bake both in the oven at the same time. It makes for a very easy hearty meal, a traditional comfort pairing.

A large apple slab pie. You line a sided cookie sheet with pie crust, then layers of fresh apples, sugar and cinnamon. This pie is large enough to serve a large crowd, or you can make it into squares for a fabulous lunchtime treat.