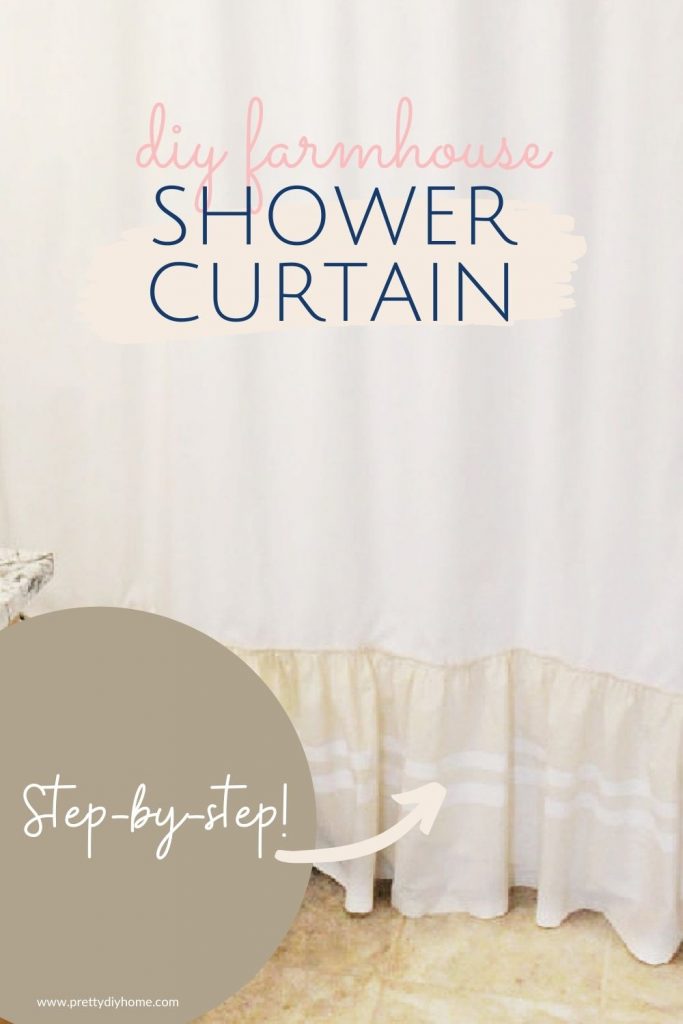 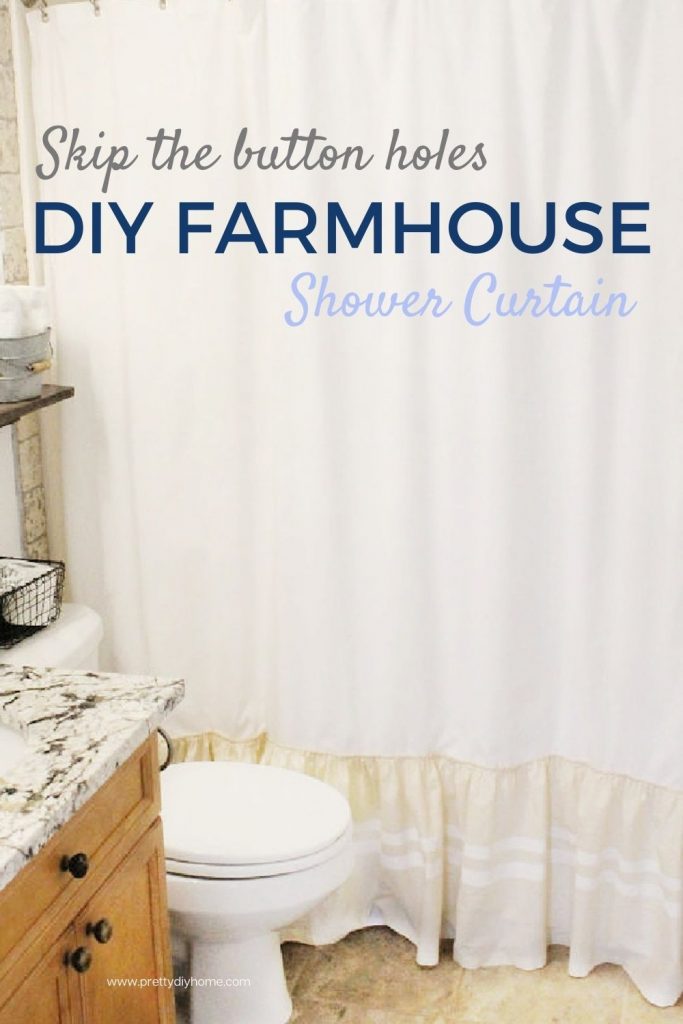 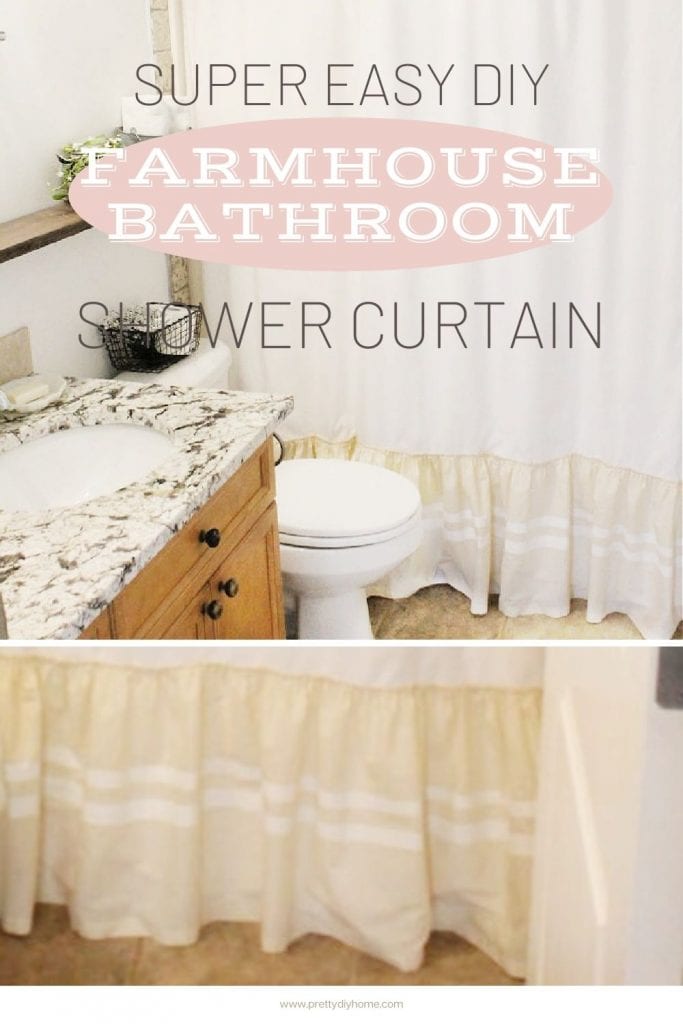 How to Make an Easy Custom DIY Farmhouse Shower Curtain

I also really enjoy the farmhouse sayings but as I told you before the same saying wears out its charm for me, and I want to use this shower curtain for awhile.   Instead I created a simple I see London, I see France sign for the bathroom. The sign is easy to do the saying can be quickly updated.

instead of using drop cloth I went shopping for a light inexpensive shower curtain with all those lovely predone button holes.  My knees went weak at the thought of making a dozen button holes, so it was well worth the $11 I paid for the plain shower curtain.

For supplies you will need.

An inexpensive all white shower curtain

Open up, iron and measure the width of your shower curtain (72″.)

Hang the shower curtain to see if it reaches the floor, make a note of the distance from the floor if it doesn’t.

Sew the two side hems first.  Fold the edge over 1/4 inch, press, fold the fabric over again and press creating them hem.  Sew the edge in place with a straight stitch seam.

Fold the bottom of your muslin 1/2 inch, press and then fold over 1 inch. Sew a seam along the edge forming the bottom hem.

The white stripes add a nice soft touch to the farmhouse shower curtain, and as the muslin I chose was cream I added white stripes to match the purchased shower curtain.  You could use white muslin and paint soft grey stripes I think it would be really pretty, depending on your other bathroom decor.

Using a ruler measure  ? inches up from the edge of the bottom seam.  Apply the tape, continue measuring as you move along the muslin, adding tape as you go.

Once the first tape is done, measure an inch, and do a second strip of tape, another inch and do a third strip of paint.

Mix together fabric paint medium with white latex paint according to the instructions on your container.  For mine I mixed it 1 part paint to ?? parts fabric medium.

Once you have the stripes painted, let dry very well. (I left mine overnight).  Once dry, remove your tape, and seal the paint by pressing with an iron.  The subtle stripes look so nice.

As the gathering for this fabric is very long, I suggest gathering the fabric with a needle and a heavy thread (like embroidery thread) instead of using the sewing machine.

Make sure your thread is long enough about 7 feet, so you can gather it all at once. Sew along edge of the top hem in 1/4 inch stitches.

You can place a pen mark 1/4 inch wide on the side of your thumb if it helps you gauge the stitch length.  It took me under 10 minutes sew the stitches so it goes really quickly. Once sewn leave long tails on both ends of the thread and tie them with very large knots.

Attaching the Muslin to the Shower Curtain

You want the shower curtain frill end to just dust the floor of your bathroom.  Remember when I suggested prehanging your curtain? If the purchased shower curtain didn’t hang to the floor, use the measurement and align the bottom edge of your frill that much lower than your shower curtain.

Begin by pinning the short edge of the muslin frill to the edge of the shower curtain.  Do this on both ends.

Laying your shower curtain flat, (I used my ironing board), pull out your gathers so they line up as evenly as possible across your shower curtain.  It helps to pin as you go, spreading the gathers a foot at a time.  Once you have them all spread out adjust if you need to.  This part is a little bit fiddly, but its not hard.

Here is the final finished shower curtain. Its so bright and cheerful and can be used year around.

This bathroom reno began with new granite, and tiles.  I made an inexpensive Brown Paper I See London I See France sign, and will share a tutorial for the long wood shelf soon. 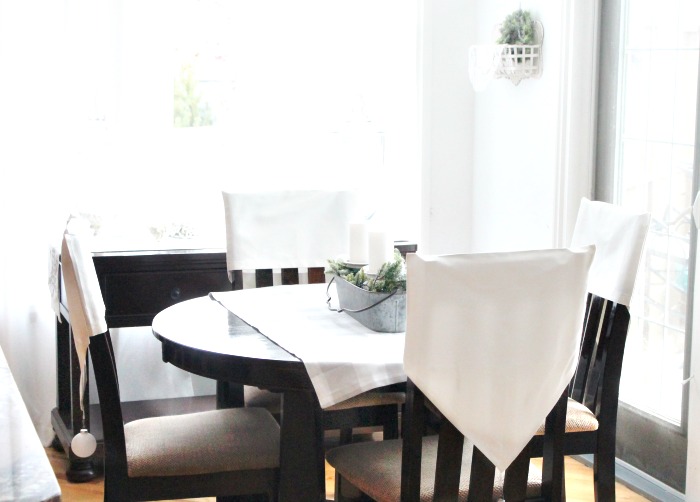 Chair Back Covers If you have kitchen chairs like ours that are simply functional,  give them some flare with these easy to make chair back covers.  My original idea was to cover the chair seats to match the front foyer’s bench but the fabric store didn’t have enough of the material in stock.  Hopefully they… 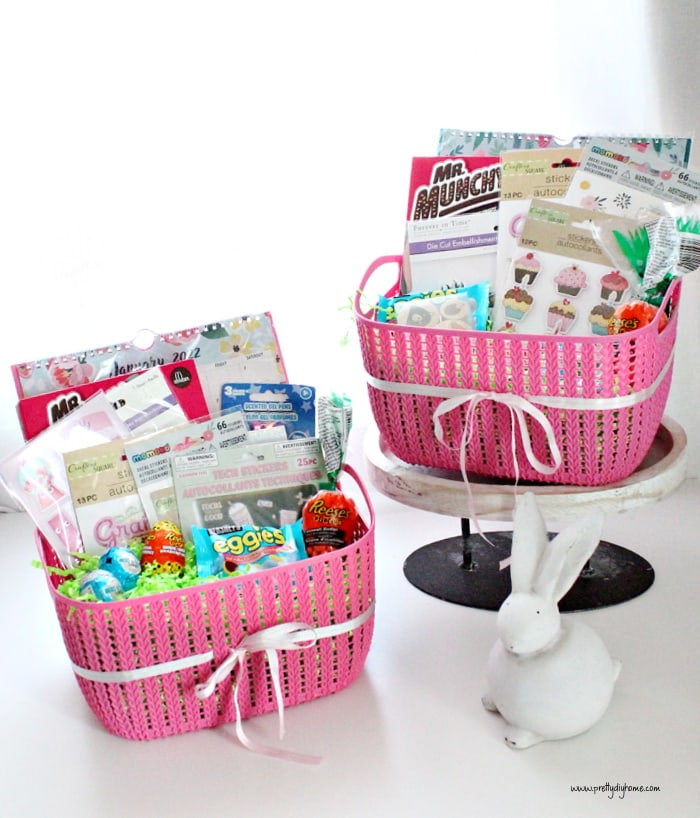 Are you looking for an awesome DIY Easter basket to give to a teenage girl in your life? I put together these DIY Easter baskets for my two tween aged granddaughters for $20 each. The Easter baskets are themed around day journaling with loads of pretty stickers, pens, and of course journals. Dollar Store Easter…

I grew up in northern British Columbia Canada. Mom was a working widow so we didn’t go to the lake or hiking much. Mom called me a house plant as I was always indoors. My siblings were all boys and much older, as long as I kept it safe I was pretty much allowed to… 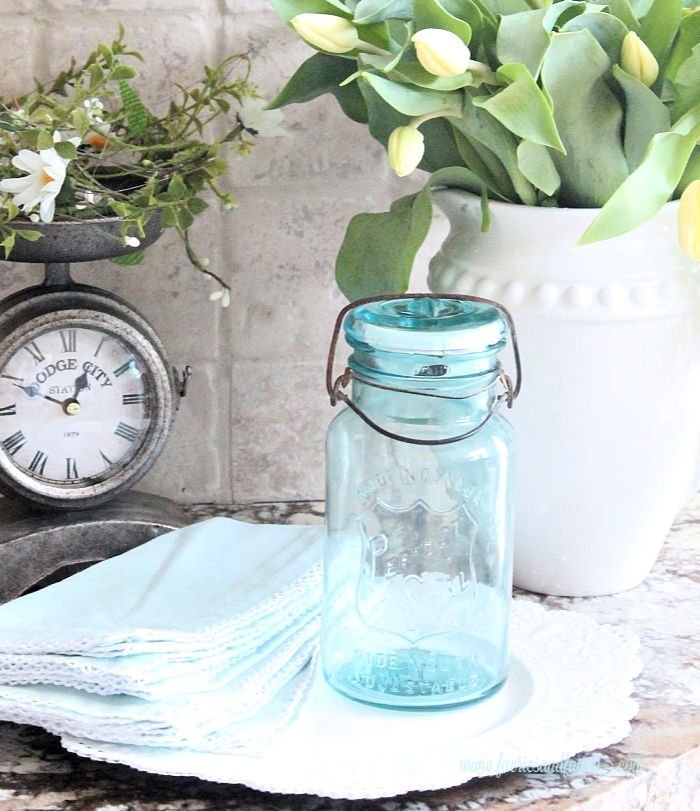 How to Upcycle a Aqua Mason Jar into a Pretty Solar Light We continue to downsize the number of things in our home.  It’s taking forever and is seriously brutal on my stash of unused goodies.  It also means I am rediscovering things that I really love,  like two aqua blue vintage mason jars.  Today… 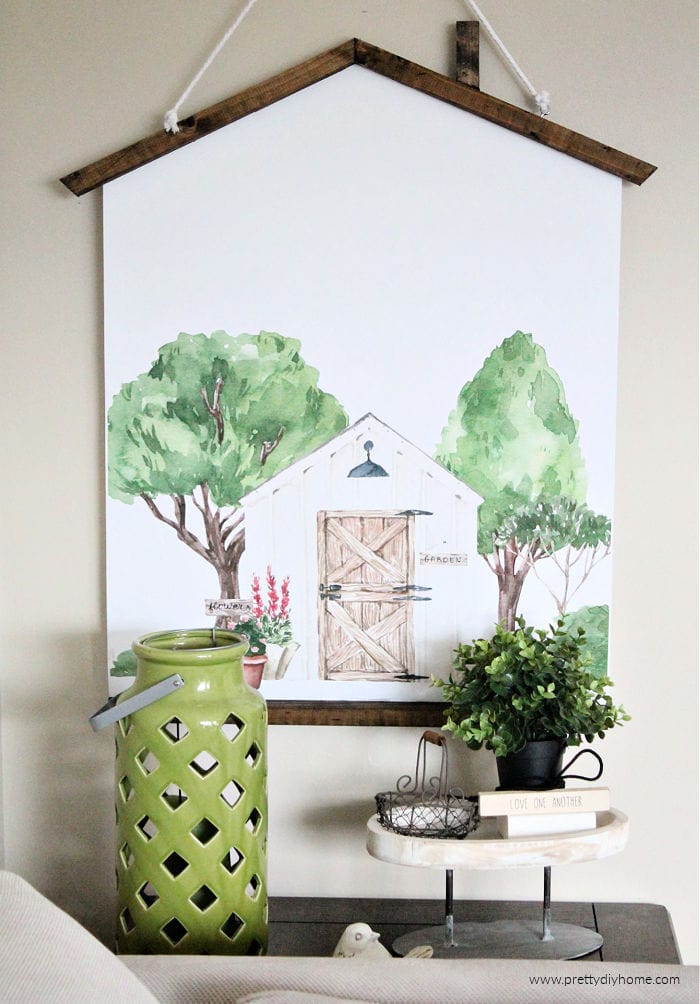 I am super excited to share today’s post about Farmhouse DIY wall decor with you. This easy to make DIY farmhouse hanger and printable is so cheerful and bright. If you’ve been wanting a farmhouse she shed, this should help with the wait. Instead of a normal square frame, I livened it up a bit… 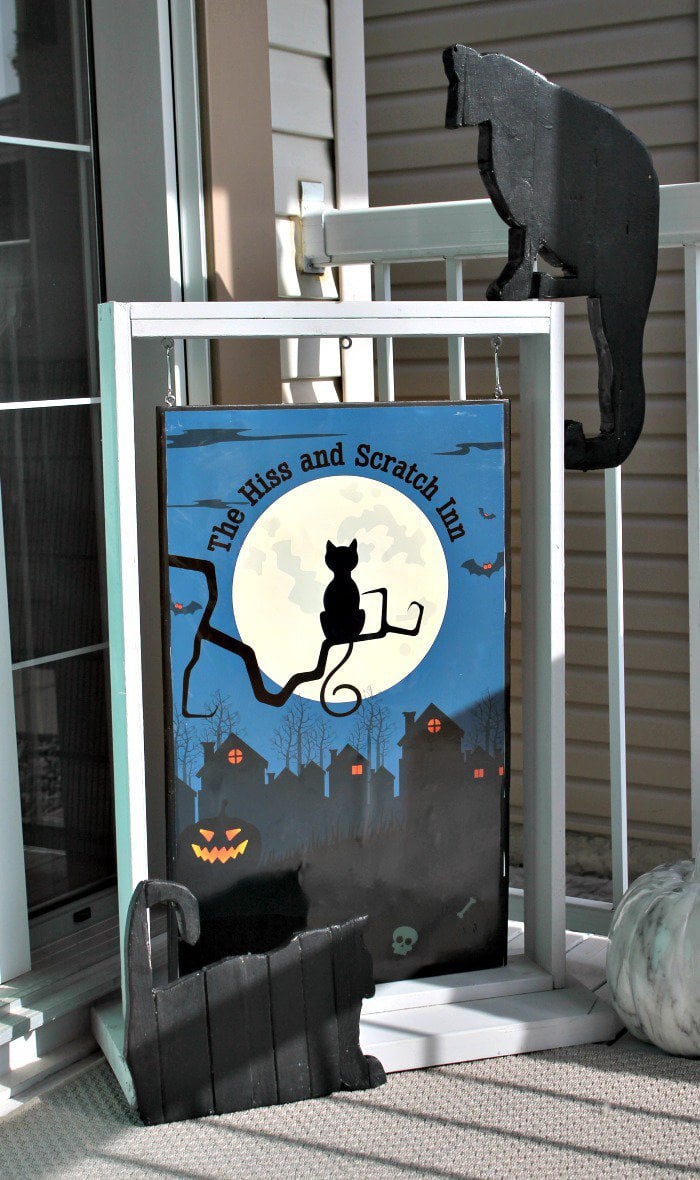 Halloween DIY Sign featuring Hiss and Scratch Inn Have some simple Halloween fun with this DIY Halloween decoration for outside. Two black cats by the names of Hiss and Scratch welcome you to the door.  Aren’t the little trick and treaters the funnest part of Halloween, our whole neighbourhood gets into it  with decorations, music,…