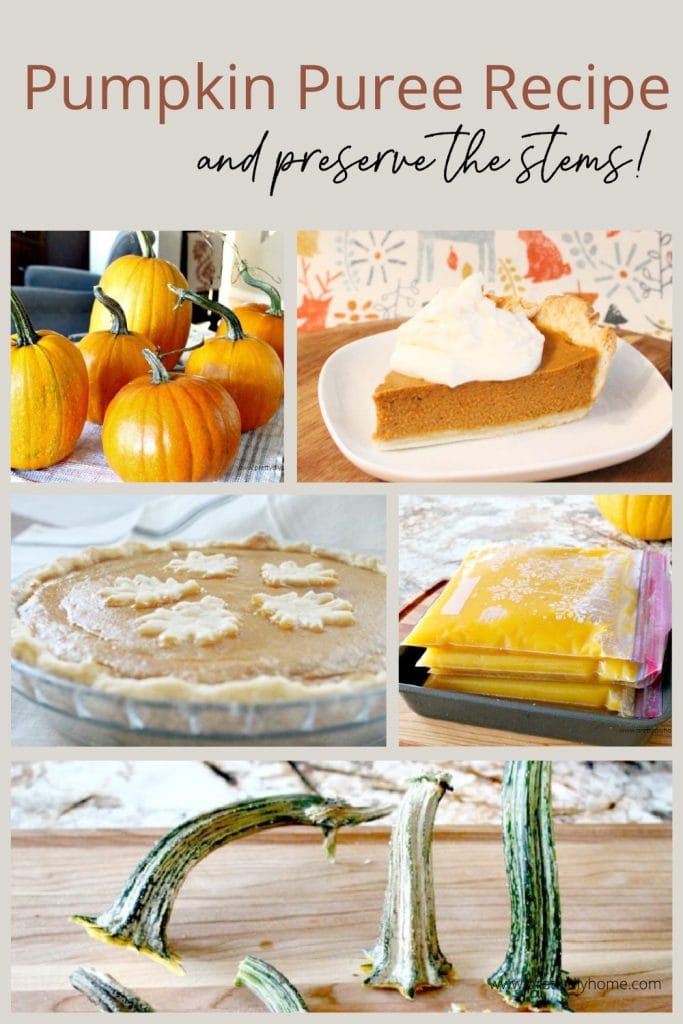 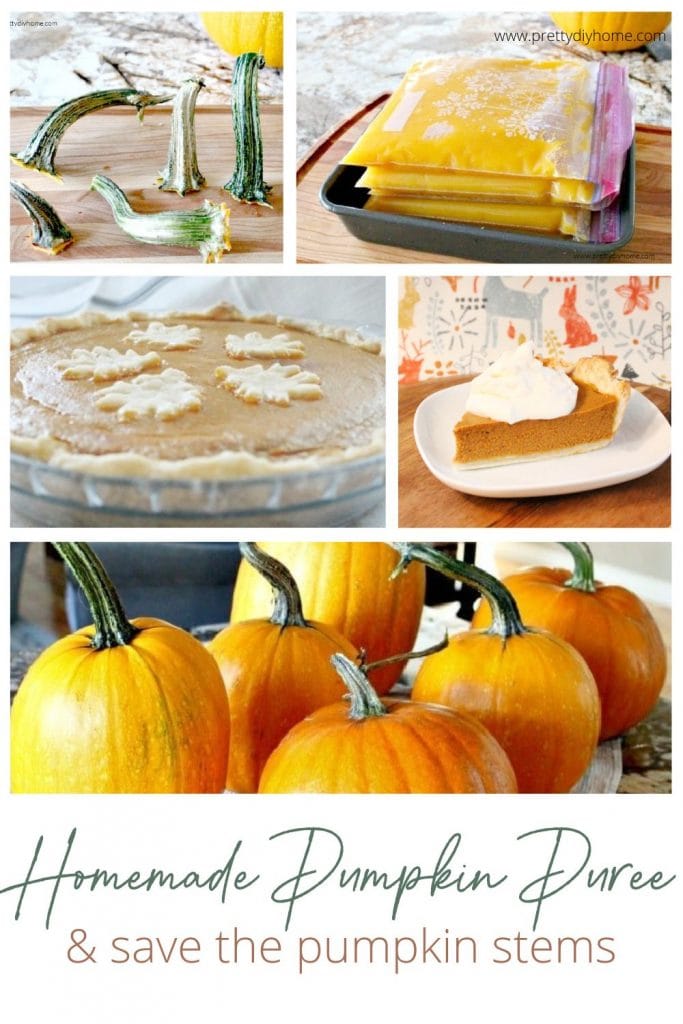 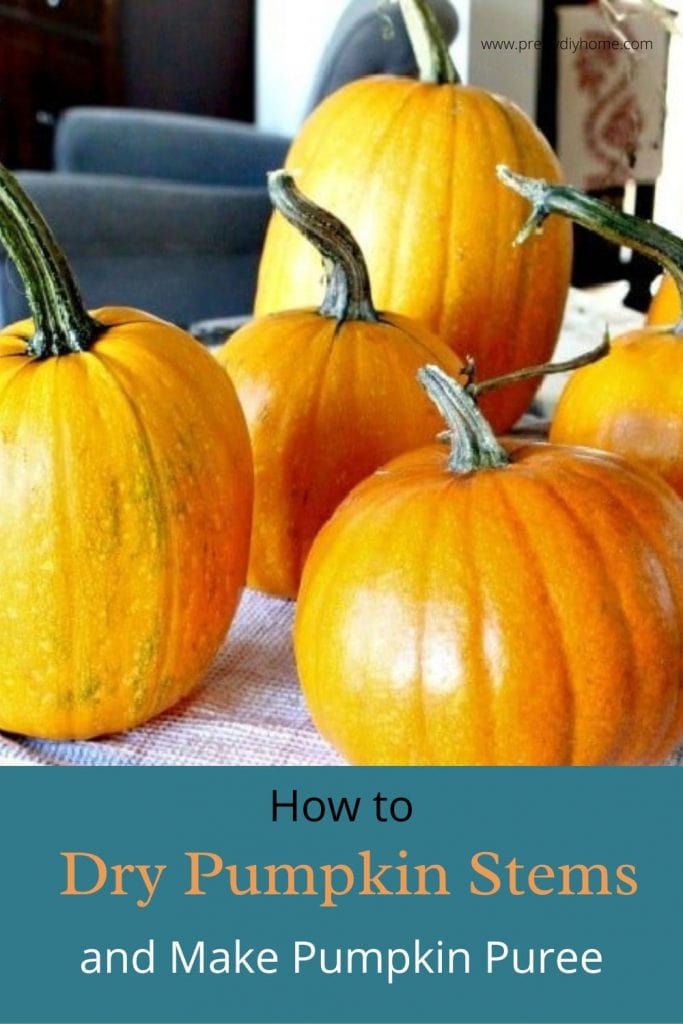 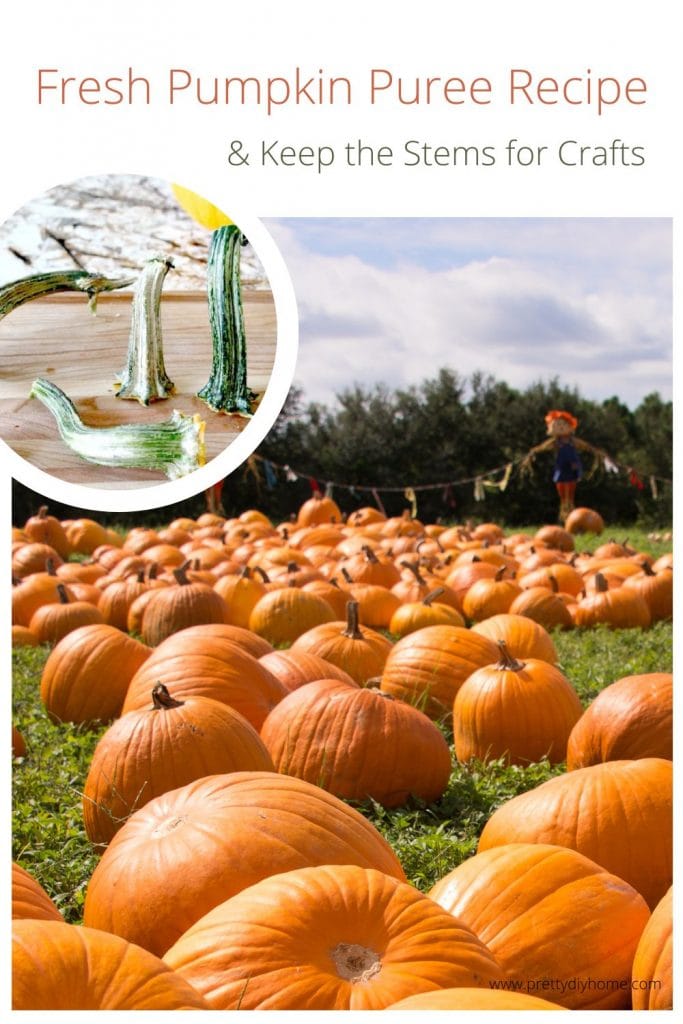 Every Fall pumpkin everything explodes , whether its pumpkin spice, pumpkin decor, or pumpkin desserts made with pumpkin puree. Have you ever thought about making a pumpkin puree recipe from scratch? Using homemade pumpkin puree tastes fresher in recipes, its cheaper than buying canned pumpkin, it freezes very well ……… AND you can preserve those amazing pumpkin stems for crafts.

If you’re like me, every August when the Fall decor season starts I want to make fabric pumpkins. These fancy satin pumpkins were made using silverware for stems as fresh pumpkins don’t hit the supermarkets until mid October.  Every year I am disappointed that I didn’t make pumpkin puree from real pumpkins and save the stems from the previous year, opting for canned pumpkin instead.  This year I finally made my pumpkin puree recipe from scratch so I could have some real pumpkin stems for next Fall.

I called around to the organic gardens and asked if I could come and get several small pie pumpkins with long natural stems.  They cut the stems extra long for me. Aren’t they lovely?

Note: You can use small pumpkins for making pumpkin puree. Some people suggest using pie pumpkin varieties, but I have successfully used small pumpkins. Just make sure your pumpkins aren’t large, you don’t want to use a pumpkin thats been grown for a jack-o-lantern.

lPumpkin Puree Recipe – Great for Pie and Other Pumpkin Recipes

Homemade pumpkin puree can be used in any recipe you typically use canned pumpkin. Swap it out cup for cup. It tastes fresher and lighter, for pies the texture can be more moist.

Fresh pumpkin is very easy to prepare and freeze until you need it.  When we lived in BC I only used fresh pumpkin, when we moved to Alberta I got out of the habit.  I prefer the flavour of pumpkin pie made with homemade pumpkin puree, and one or two small pie pumpkins will provide you with all the pumpkin you need.

You need one or two small pumpkins to get enough fresh puree for a large pumpkin pie. I bought five small organic pie pumpkins as I want to freeze some, but you may not want that much pumpkin on hand.

My pumpkin puree recipe only uses pumpkin, nothing else is needed.

Wash the pumpkins really well.  Be careful, pumpkin stems are surprisingly pricklish, protect your hands with gloves or a towel when handling them.

Cut the stems off the top and set aside, to preserve afterwards.

Cut the small pumpkin(s) in half.

Using an ice cream scoop remove the seeds, this will save you so much time and keep your hands cleaner. p

Lay the pumpkins open side up on a baking pan.  Set the oven at 350 F and once up to temp roast your pumpkins for about 45 minutes until the flesh is soft and easy to pierce with a fork.

Remove from the oven and let cool a little bit.

The outer casing of the pumpkin is quite strong and hard.  Scoop the cooked pumpkin flesh out with a large spoon into a food processor, or if you don’t have one, mash the pumpkin really well instead.

Divide the pumpkin puree into two cup portions, as thats typically the amount of pumpkin most recipes call for. If using the fresh pumpkin soon you can store it covered in a plastic container for up to a week. If you keep it that long the pumpkin may turn a bit watery, just pour the juice off and stir you pumpkin before using it.

How to Freeze Pumpkin Puree

From experience I found most recipes use 2 cups of pumpkin. So that’sthe portion I place in each bag.

Once cool transfer a portion into a small freezer bag. Mark the date on the freezer bags, lay each bag flat and freeze. c

Frozen pumpkin puree will keep in the freezer from 3 to 6 months. Some recipes say it can keep up to a year.

To thaw pumpkin puree, I like to place it in a bowl of cold water for 10 to 15 minutes. Or you can place the bag of pumpkin in a bowl in the fridge the night before to thaw.

With a very sharp knife cut out the pumpkin stem from the top slice of the pumpkin.

Once the stem is removed hold it in a cloth covered hand (pumpkin stems are prickly) and carefully peel off any of the remaining pumpkin.

Place your pumpkin stems in a cool dark place until they are completed dried, it will take about 8 weeks.  Once dry you can use a fine sandpaper to remove the prickles and any little dried bits of pumpkin off the stem. h

Once the stems are dry you can place them in a plastic container for the next year.

If you want to use your pumpkin stems right away, you can dry them in the oven. Just place place them on a parchment lined cookie sheets and bake them for 2-3 hours at a low temperature. Your stems will change colour which doesn’t really matter as we usually paint them. They will also be lighter. I prefer to just dry mine naturally, but sometimes you just forget to plan ahead.

Hubs was home when I made the pumpkin puree.   You may have noticed the amount of pumpkin puree ready for freezing in the picture was small.  He asked for a pie so I made that and the rest of the pumpkin puree I will bag and freeze tomorrow.   In total, I got 20 cups of preserved pumpkin. 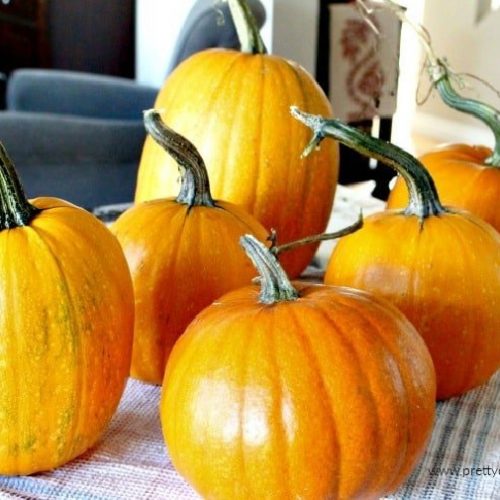 Fresh pumpkin is wonderful for any pumpkin recipe, you can substitute fresh pumpkin for canned pumpkin cup for cup in any recipe you like.

No Bake Pumpkin Cheesecake in a Jar

Or try these soft and chewy Pumpkin Sugar Cookies.

The real preserved pumpkin stems are the nicest stems for DIY fabric pumpkins of any style, but I made my stems into these high end copycat Velvet Pumpkins with Real Pumpkin Stems

Fresh pumpkin is super easy to make, and you got get so many recipes for Fall with the real pumpkins. The fresh pumpkin is especially great for pumpkin pie, again just swap out the pumpkin from your recipe cup for cup. Please let me know how to works out for you.