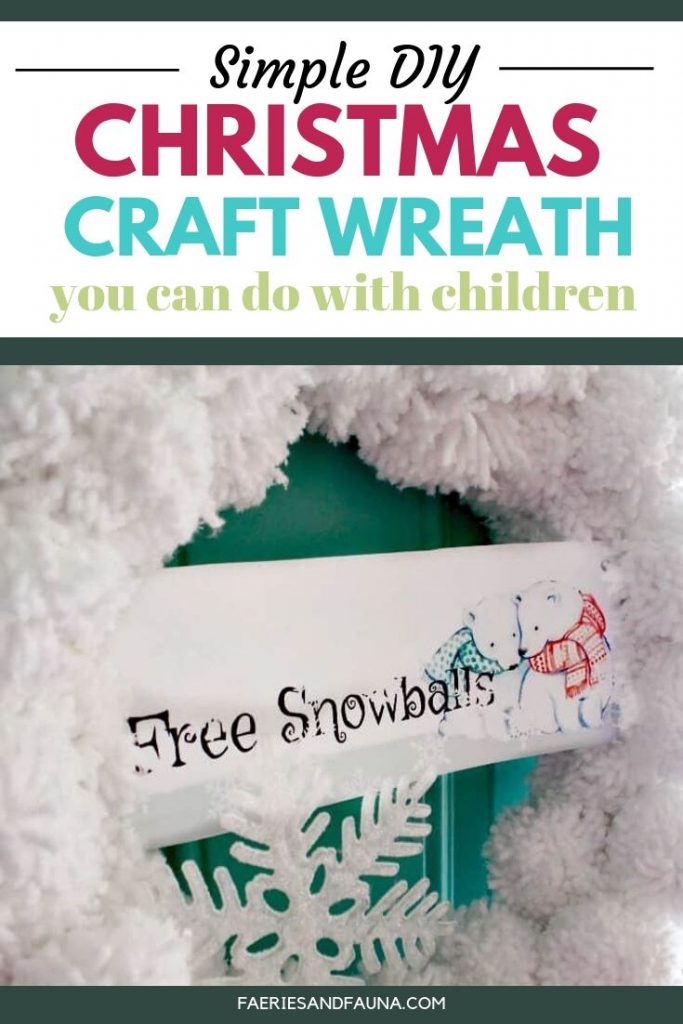 Are you getting as excited about the holidays as I am?  Everything here is  decorated just putting the finishing touches on the sparkly stuff and starting to think about the menu.  Decorating and seeing all the creativity came alive really puts me in the holiday mood. In today’s post I am sharing a DIY Christmas wreath made with lots of bright fluffy pom poms to create a Snowball wreath for the front door.
x 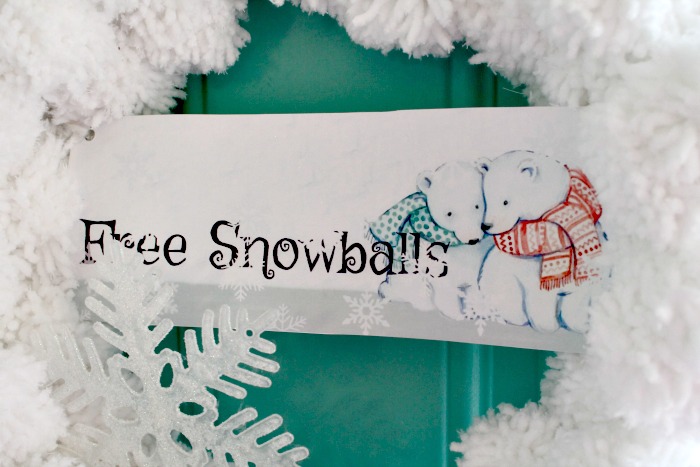 This wreath started as a snowball pillow for my grand daughter’s room.  I had it all made and on the bed and the pom poms were staying together very well, but the wool itself was really shedding.  The wool is so soft it’s like a cloud but I didn’t like it being on the bed.  As a result, I tore it apart and made this snowball wreath out of pom poms instead and I love it.
s 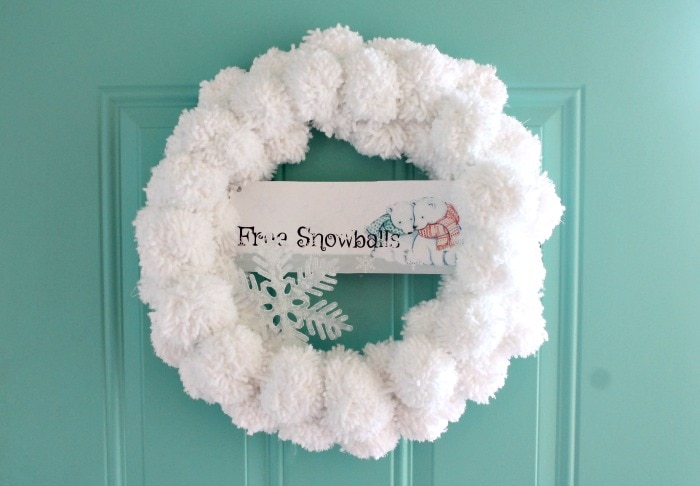 You will need 50 large pom poms for this large 18″ wreath.  Of course if your wreath is smaller you will need less of them.  It took me about a week to make them doing a few a day as I was sitting and visiting with my son who just moved back home.  If you have children at home they will enjoy making Pom Poms, my granddaughters who are 6 and 8 love making pom poms as a craft when they come and visit.

As I was planning on making lots I did some research online and finally chose the Clover brand pom pom maker as it had really good reviews.   The two makers were $13 in Canada at Michaels and I got them 50% off with a coupon.  So worth the cost. I am not being paid for my opinion at all and I have to say I love it.  It’s fast and easy to use.  It took me 7 minutes to make a large pom pom and because of the design of the maker, the cut threads are similar in length.
l 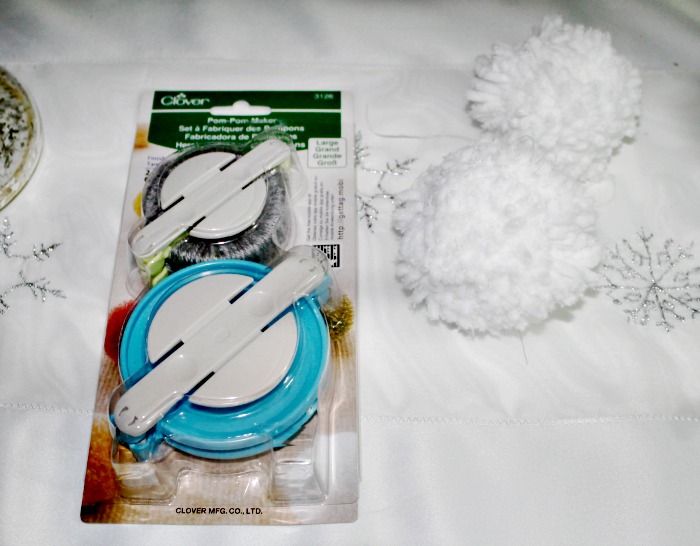 g
Here is a complete tutorial video from Red Tea Art    it shows you how to use the pom pom if you need full instructions. 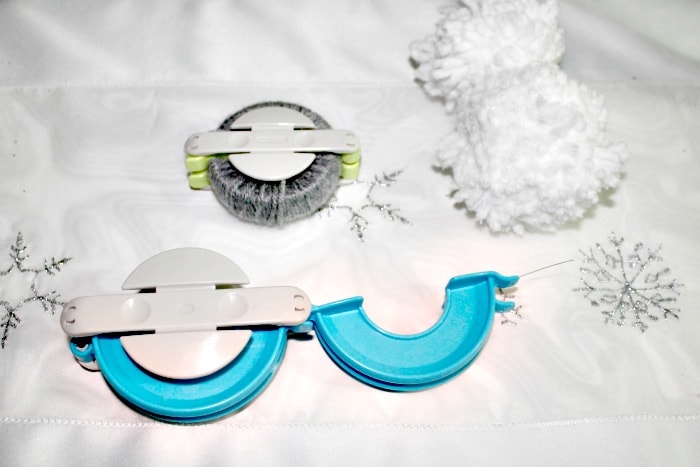 Once you have both sides full of wool, close the pom pom maker and snip it in the middle.  Cut the wool with scissors where I have the blue arrow.
o 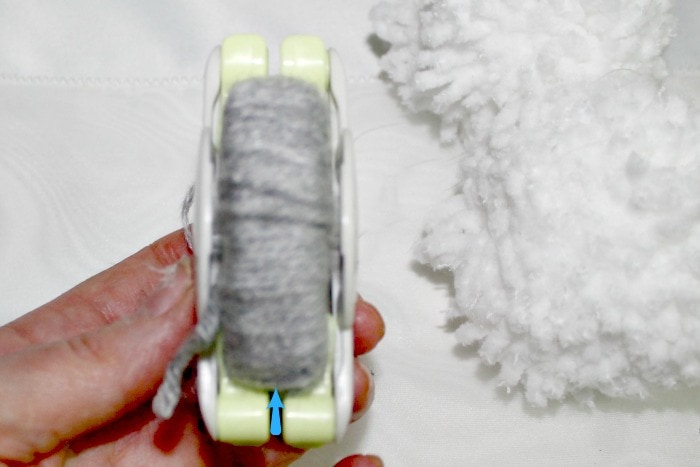 h
Do not use wool to tie your pom pom together, use dental floss.  It is much thinner and stronger than wool or string, so you can pull it really right and you will end up with a much more secure pom pom.   Wrap the dental floss around the pom pom maker where you just cut the wool.  Pull the floss as tight as you can and add knot firmly

Pull the two sides of your pom pom maker apart to release the pom pom.  Place them back together and start on the next one. 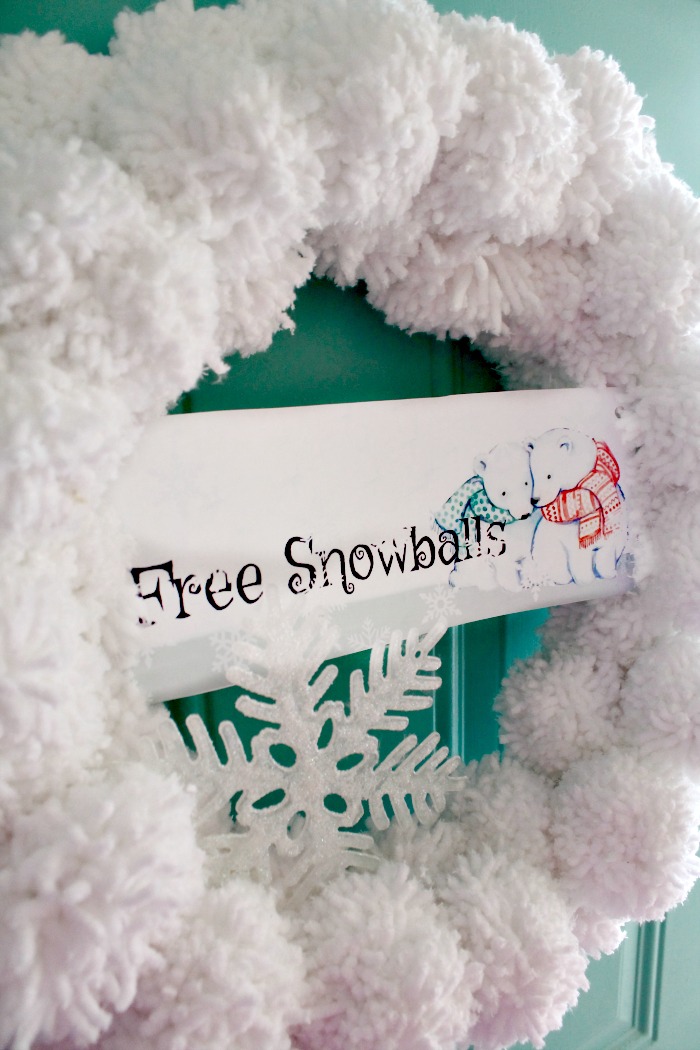 I have a large wreath form that’s been kicking around for so long I don’t remember.  Unfortunately, it is 18 inches so it needed 50 pom poms to fill it.  You can use a smaller wreath form if you like.

The supplies are simple.  A form, a little bit of matching wool, a large eyed needle for the wool and 50 pom poms.
d 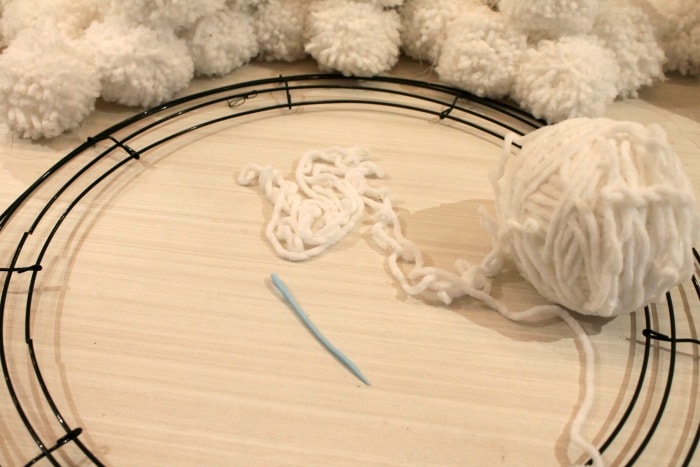 First row –  Tie the end of the wool to the wreath form with a knot.  Cut four or five feet of wool off and thread the other end onto the large needle.  Place your pom poms on the top of the wreath.  Sew each one through the middle of the pom pom.  When you pinch your pom pom you will be able to feel where the center is with the ties dental floss, pass the needled through that loop.

Pass the needle through the frame and then continue with the next pom pom all the way around.   Cut the wool and tie the end to the wreath form.

Second row – Starting with a new piece of yarn attach another row of pom poms on the inside of the wreath form.

Third row = The last row is placed on top of the first row of pom poms.  This time attach the pom poms and run the thread through both layers of the pom poms to the form.   Continue to the next pom pom.

You may find that you pom poms flop around a bit.  To fix this sew one pom pom to it’s neighbour, making sure to pull the wool through the center of the pom pom.  Do this along each row.

Print out the Free Snowballs Printable  on to card stock. Hole punch the two top corners and tie them to the wreath form with some wool.  My wreath has a plastic dollar store snowflake snuggled into the snowball wreath. 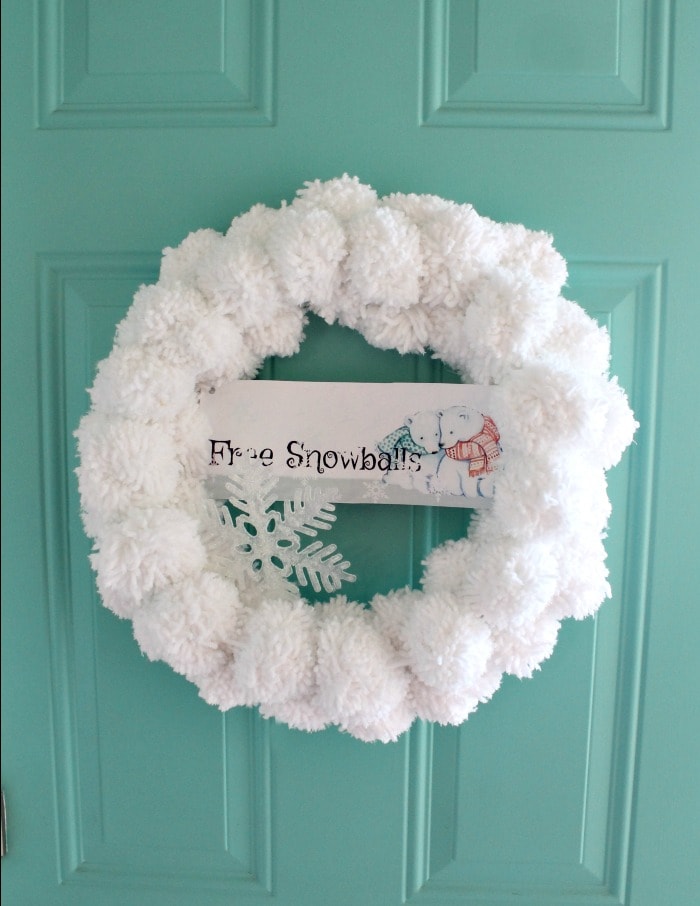 Day Nine of the 12 Days of Christmas –   DIY Christmas Wreaths

Today’s 12 Days of Christmas challenge is about Christmas wreaths.  Wreaths are such a tradition for Christmas, my Mom was very practical and not into decor very much, but she always insisted on having a beautiful wreath for Christmas.   I don’t remember ever hanging a wreath on the front door for Christmas but am happy to be finally joining in on the tradition. 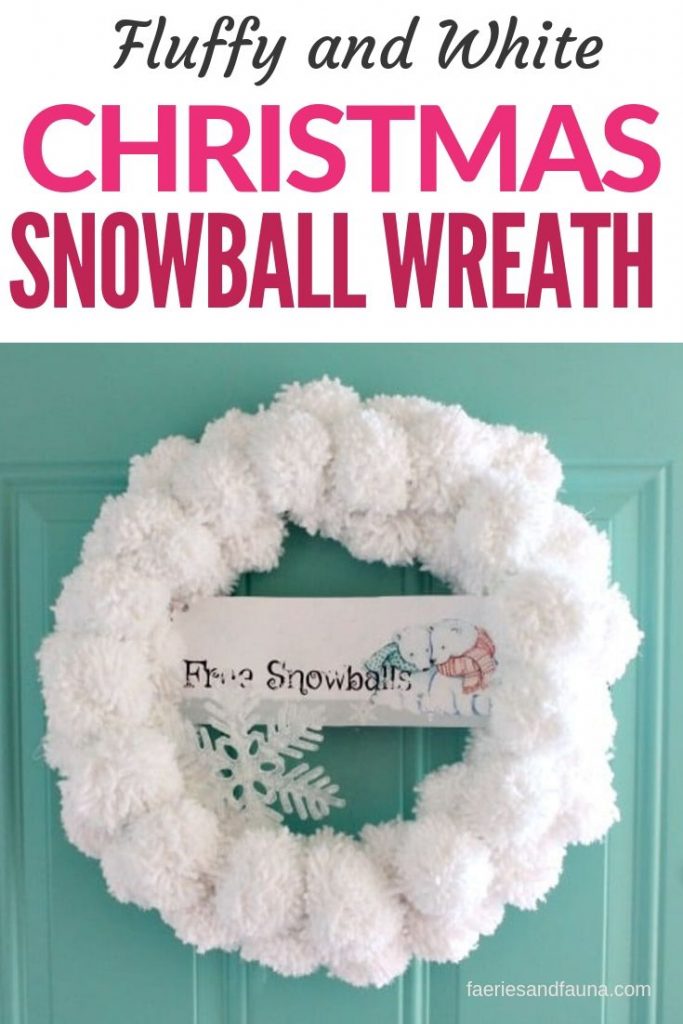 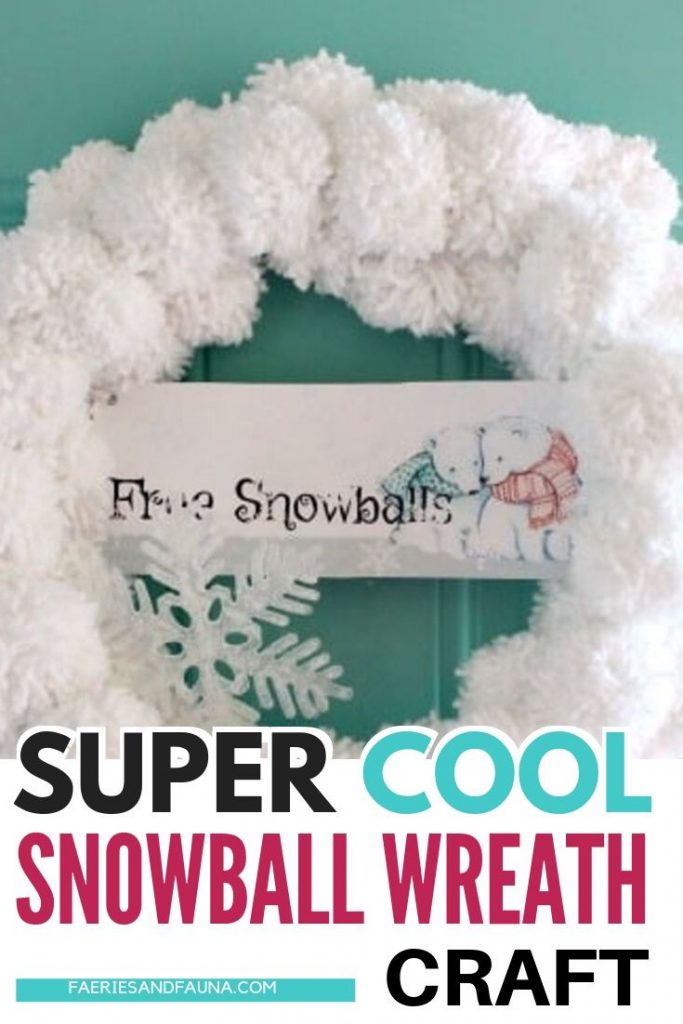