Sew a One of a Kind Pretty Tea Towel

These pretty tea towels are large and the material coordinates with a cushion I made.  Using your own material accents you can make matching table runners or curtain tie backs or heating pads as well.  Although the Spring line of adorable tea towels in the stores are too cute to leave on the shelf; I always grab at least four of them.  But I still prefer these pretty DIY tea towels as they are larger, fun to make and one of a kind.
a 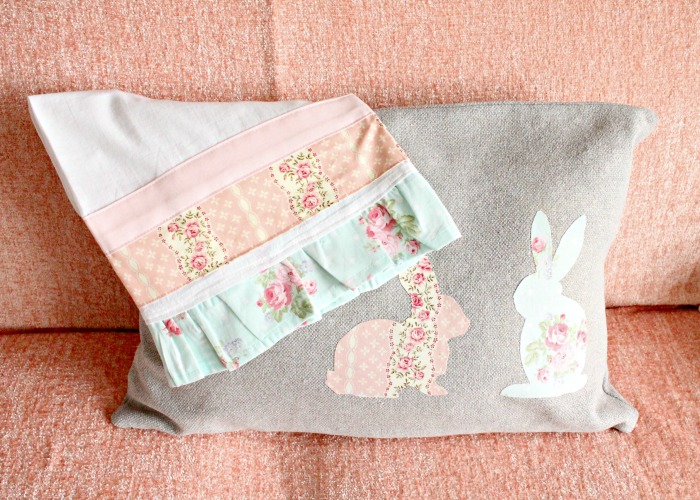 For this post I made two different styles, each one requires the same supplies.

To make one pretty tea towel you will need:

3 styles of coordinating fabric at least 2″ wider than the flour sack towel.

Prewash and iron all your material prior to cutting. 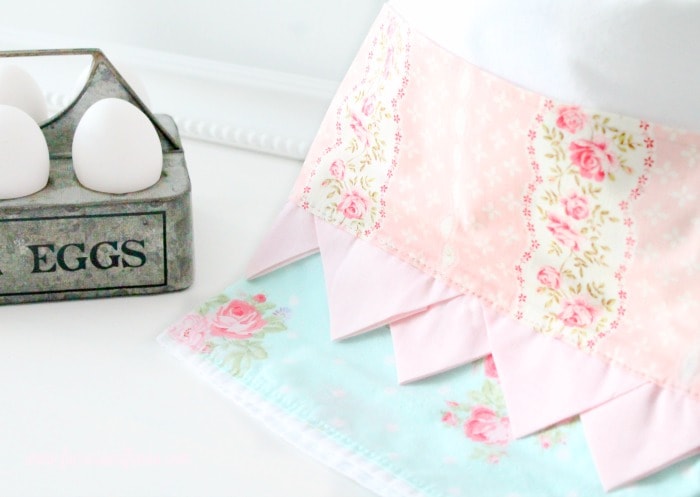 j
To make the 4 inch wide strips, cut the material 6″ high, and two inches wider than your flour sack towel.

For the prairie points cut ONE piece of material 8″ high and four inches wider than your towel.

It is easiest if you have a cutting wheel and quilting mat.  My cutting wheel needs replacing so these were cut using just scissors and a ruler.

Although the actual sewing of this tea towel is super easy and super fast, I need to point out the importance of ironing the seam edges Very Straight before sewing.

Find a pattern in your material and fold over 1″ top.  Press well and double check this top fold is very straight.  Once that is done, place your ruler on the seam and fold over and press the bottom seam exactly 4″ from the top.

Once you have the outer edges pressed well fold the edges in and press.  Doing it this way makes sure your outer edges are exact.  If your cutting wasn’t perfect the cutting edge is hidden.
a

a
Easy to Make Prairie Points

Prairie points are typically a real pain to put together,  cutting, folding, pinning and then sewing each point.  I  knew there had to be an easier way, after some research I found the perfect video tutorial from Fave Quilts.  Here is my step by step instructions. I outlined the four stages in one photo for you.
a

Go to the other side of your material and starting at the edge mark 2″ in from the edge, and then every four inches after.  This will give you staggered marks.  Then carefully cut each mark to the center crease, getting as close as possible without going over.  The hardest part is done.

2.  Fold each “strip” in half diagonally and press.

3.  Fold the triangle in half again forming the point.

4.  Form all the points down one side, then fold them all along the other.  Fold all the points into a line. ”   You end up with a single strip of prairie points staggered by 2. I love this method and won’t ever use the other method again.

Now that you have all four strips prepared, now comes the easiest part.

Center the prairie point strip on top of the lower strip ( mine is blue). Sew as close to the edge as possible.
a 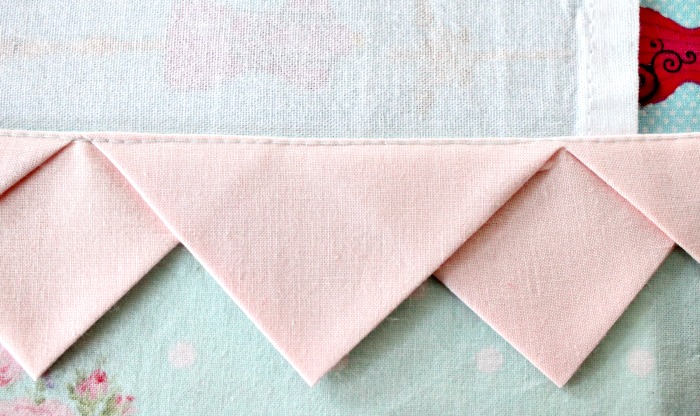 Now that you have the prairie points attached. Leave a little gap at the bottom to show some of the white flour sack.  Center the strip on the flour sack and sew the bottom edge
j 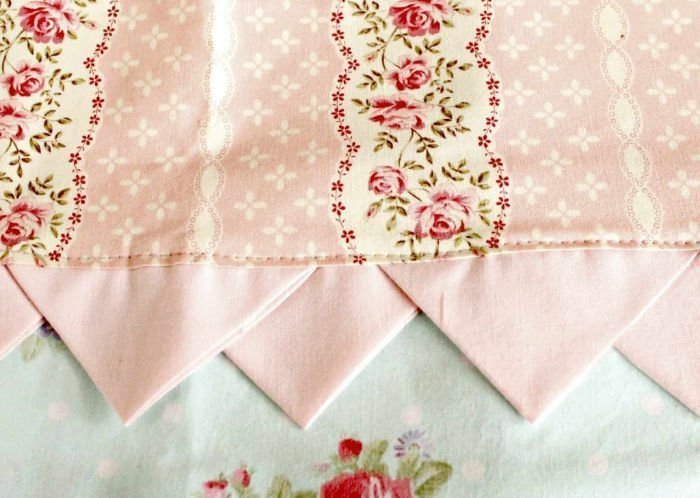 Now that all the strips are attached, press well. Flip over. 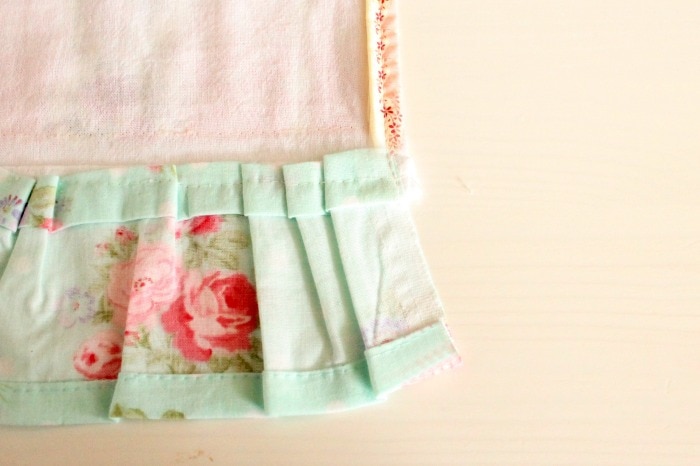 Working from the back cut the uneven edges even to about 1″ from the edge of the towel. Turn the edges over to form a tiny hem and press.  Sew into place and repeat for the other side.

a
Ruffled Edge Tea Towel
a

t
The actual sewing of this tea towel is even faster than the prairie point tea towel.

Cutting the material is easier if you have a cutting wheel and quilting mat.  My cutting wheel needs replacing so these cuts were made using scissors and a ruler.

I need to point out the importance of ironing the seam edges Very Straight before sewing.

Find a pattern in your material and fold over 1″ top.  Press well and double check the top fold is very straight.  Repeat for the bottom,  double check that it’s even with a ruler.

Once you have the outer edges pressed well fold the edges in and press.  Doing it this way makes sure your outer edge is exact.  If your cutting wasn’t perfect the cutting edge is hidden. 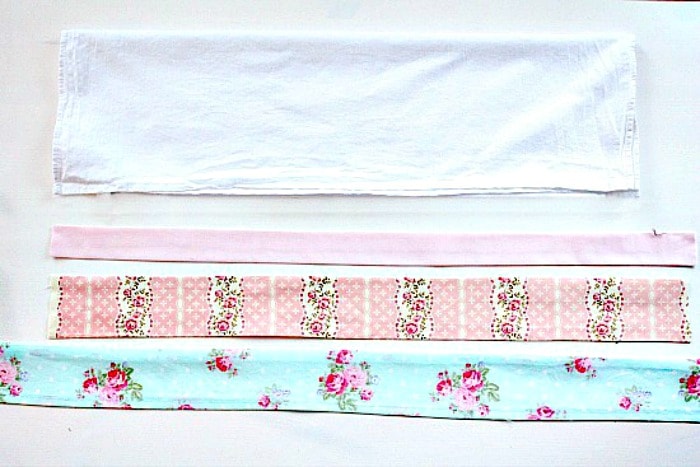 Making and Attaching the Ruffle.

Fold over the long edge of your ruffle material 1″ and press very well.  Fold the material inside to form a hem.  Repeat this on the other edge and sew.

With a needle and thread baste the unsewn edge.  Gather into ruffles, spread it out to match the width of your towel.  Pin the corners in place first, make the ruffles as even as possible.  The wider your material the more significant your ruffles will be.

Sew to the underside of the flour sack towel.

Center your next strip (pink floral) an inch from the tea towel edge and sew.  This leaves a little white strip showing.
g 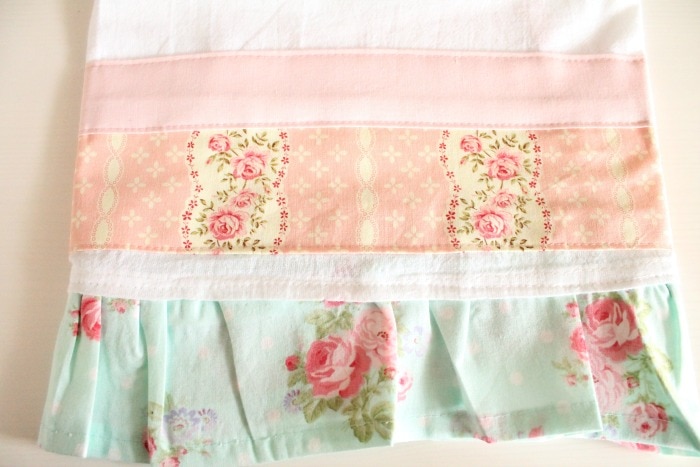 q
Center and overlap your thinnest strip ( plain pink)on top of the floral and sew top and bottom.

Working from the back cut the uneven edges even to about 1″ from the edge of the towel.
f

Fold the edges to form an even hem along the edge.  Sew to form the edge.

Press and iron.
u 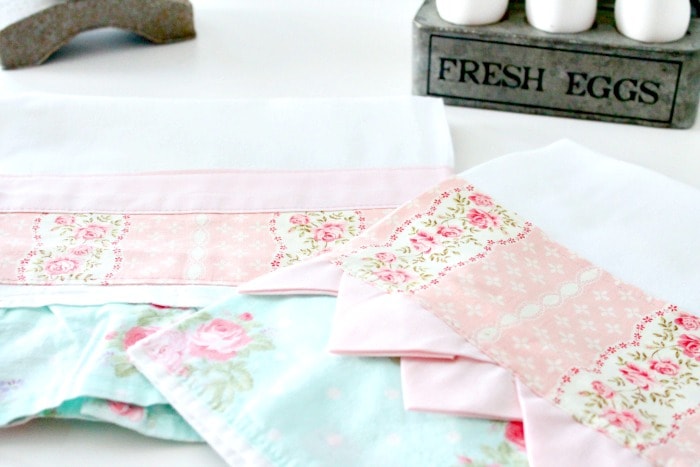 I hope you enjoy this tutorial.  Please comment if you did.  Receiving feedback is a wonderful thing.