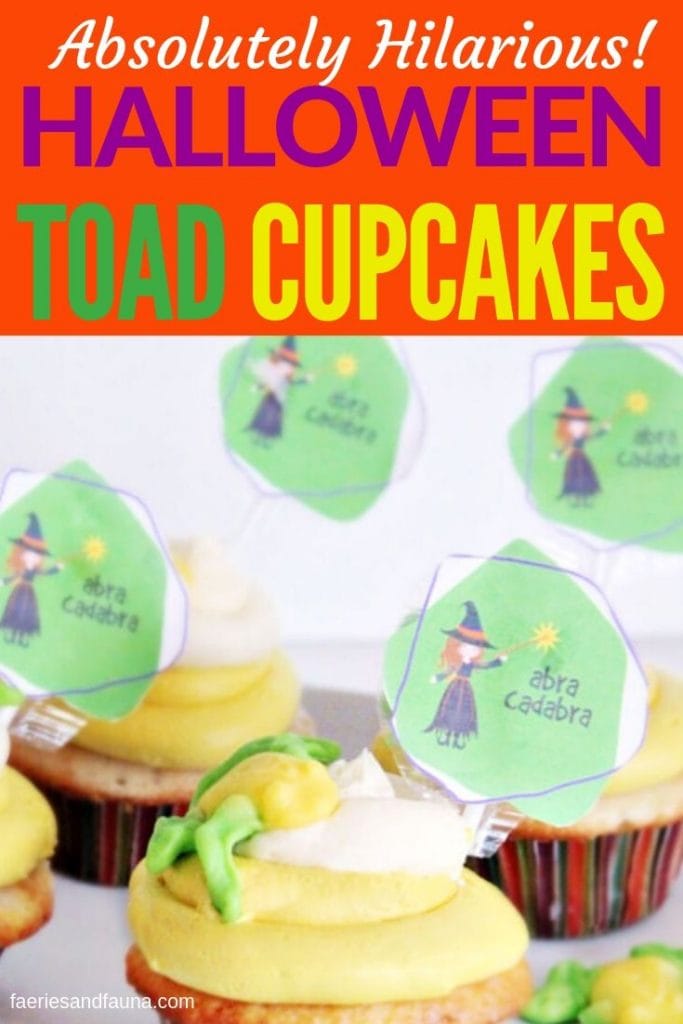 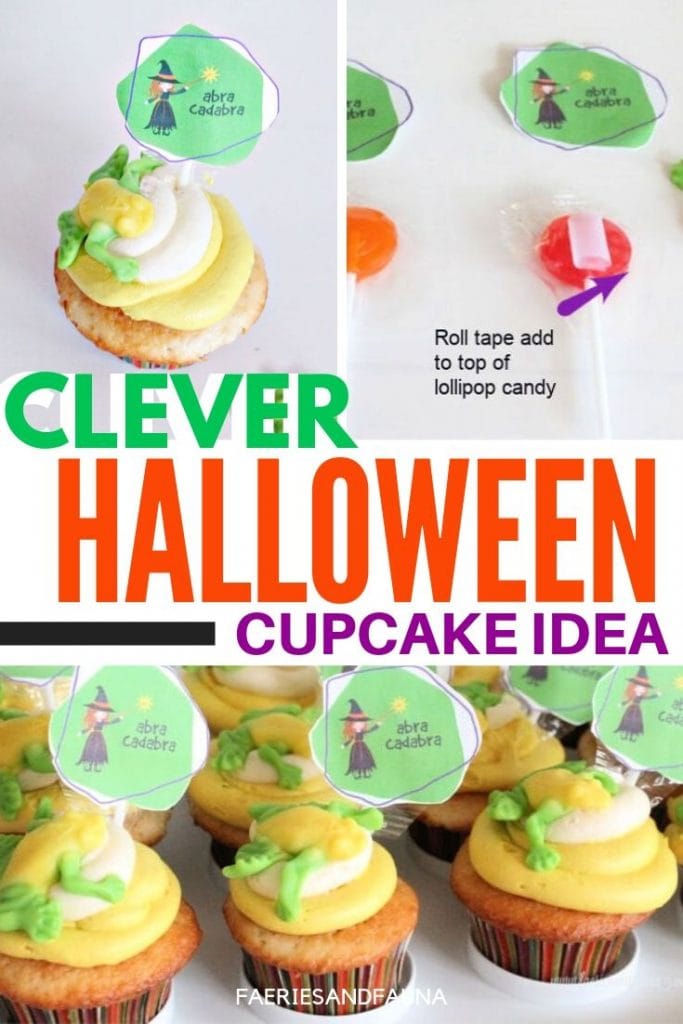 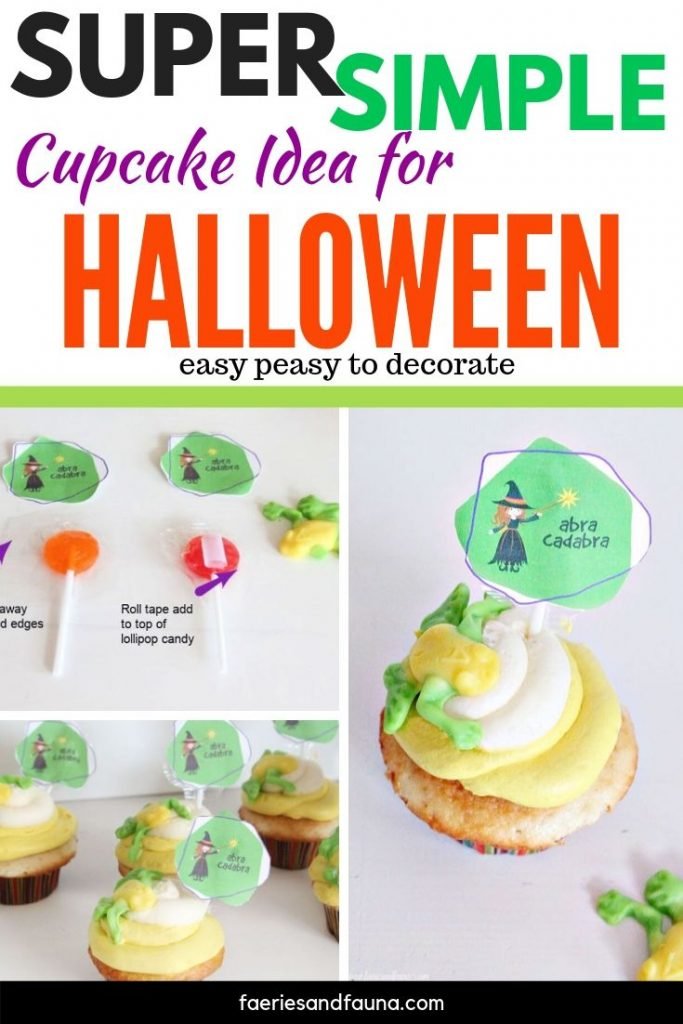 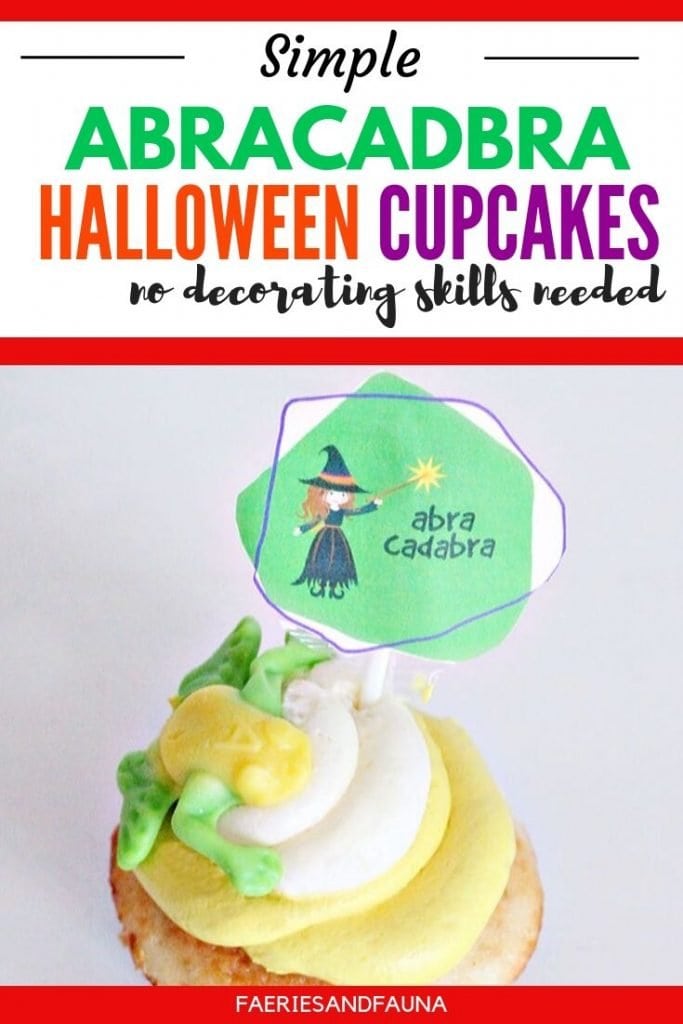 These Halloween cupcakes are very easy to make and I hope a little bit different.   I was actually looking for other Halloween gummies for making cupcakes but instantly fell in love with the little  toads. I think they are so much fun!  Abracadabra and everyone’s a toad. 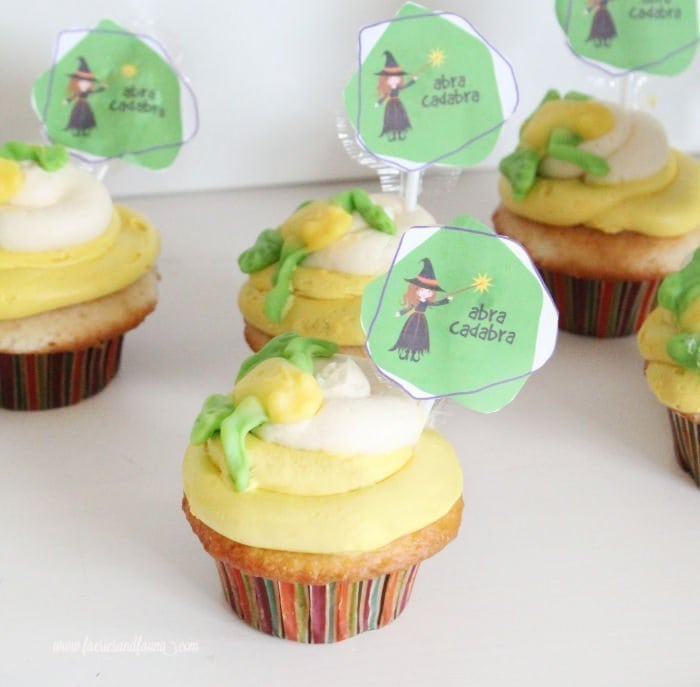 When making cupcakes for children I expect them to use the actual cupcake as a  container for holding the icing.  I do not put much  effort into the actual cupcake, but give the cupcake tops a little extra icing to be licked off.  These cupcakes take no cake decorating skills, and are super easy to put together for a a children’s Halloween party.

The only recipe here is for icing, if you prefer to buy canned icing I would buy two can’s of white icing.

12 cupcakes, from a mix, recipe or purchased.

Start by lining 12 cupcake tins with pretty Halloween themed liners.  Fill with the cake mix batter made according to the box instructions, and bake.  Make the icing while letting the cupcakes cool.

In the bowl of a stand mixer with the whisk attachment add and then cream the butter on high speed until airy and light,  Beat for a couple of minutes pushing scraping the sides of the bowl with a spatula occasionally.

Add the icing sugar one cup at a time mixing well after each addition.  Make sure to scrap down the side s of the bowl .

Add 1 tablespoon of milk and mix on high until incorporated.  Just the consistency of your icing, add more milk if needed.   Once the milk is incorporated turn the mixer onto high and beat for 7-10 minutes scraping the side of the bowl several times.

Remove 1/3 of the icing into a bowl and set aside to use for the top of the cupcakes.

Add food colouring to the remaining 2/3 of the icing and mix until well blended. 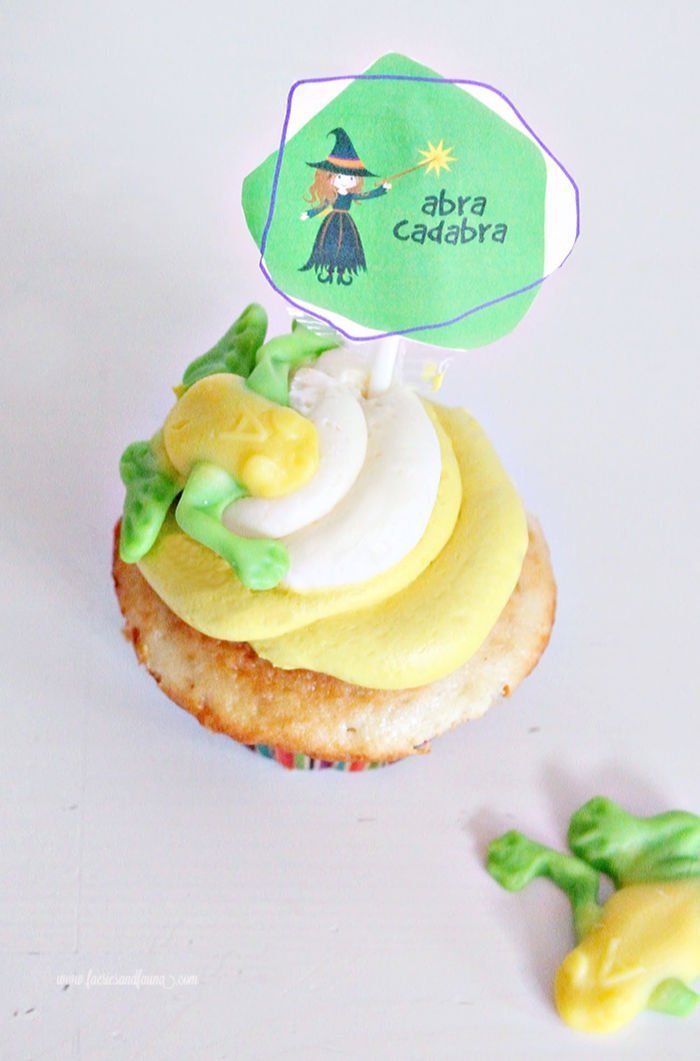 Fill a large icing bag with the yellow icing.  If you have a large plain icing tip attach it, as I did not have one I didn’t use any tip, but just the round opening on the bottom of my icing bag.

Make a large swirl with the yellow icing,  then repeat with a smaller swirl of the white icing.

Place the gummy toad on the side of the cupcake.

Trim the edge of the lollipop plastic along the wrinkled sealed edges.

Add either a piece or curled up tape or a glue dot.

Stick the paper label to the tape.

Stick the sign into the side opposite the little toad. 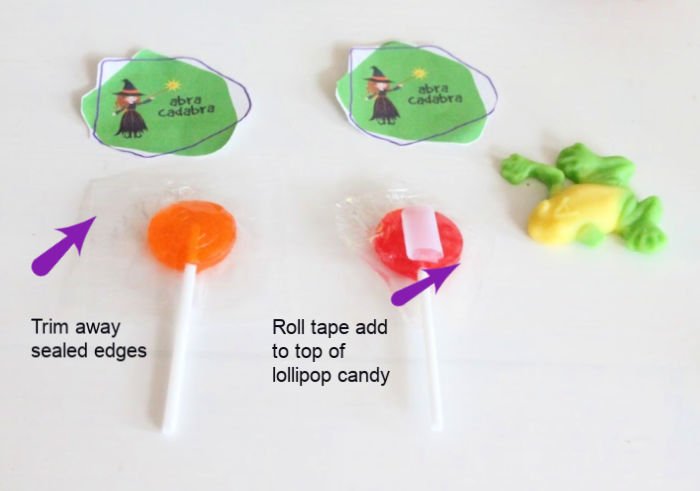 I wondered if using the lollipops for the Abracadabra cupcake toppers would make the cupcakes too high for a cupcake carrier. 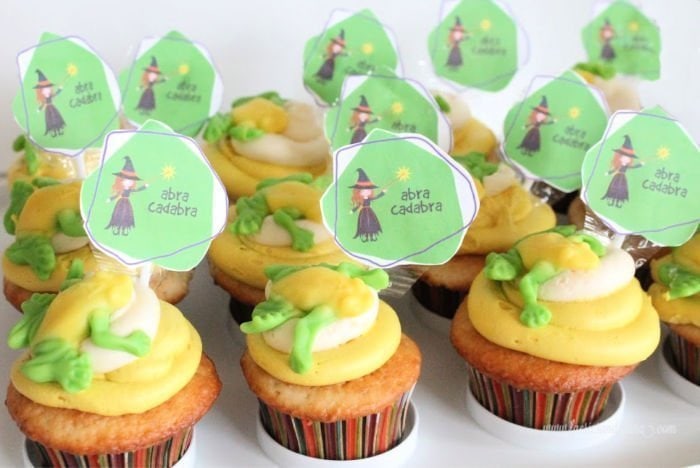 The cupcakes worked find in my cupcake carrier.  My grand daughters haven’t been by for a visit so these cupcakes are staying in the freezer for a month or so in the hopes I see them before Halloween.

Pin me for Later 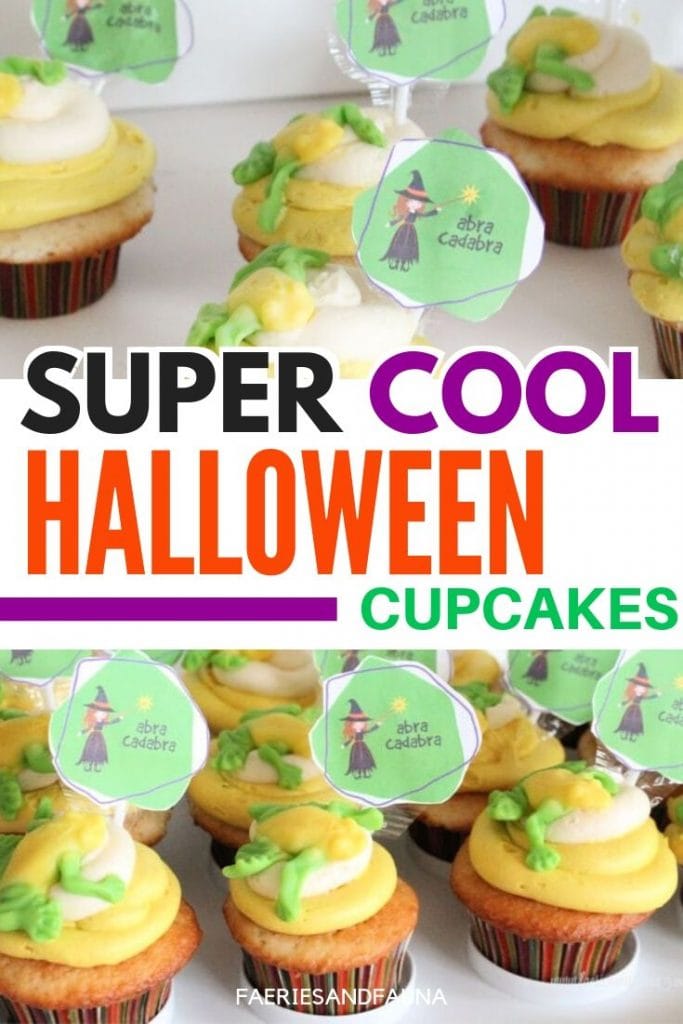 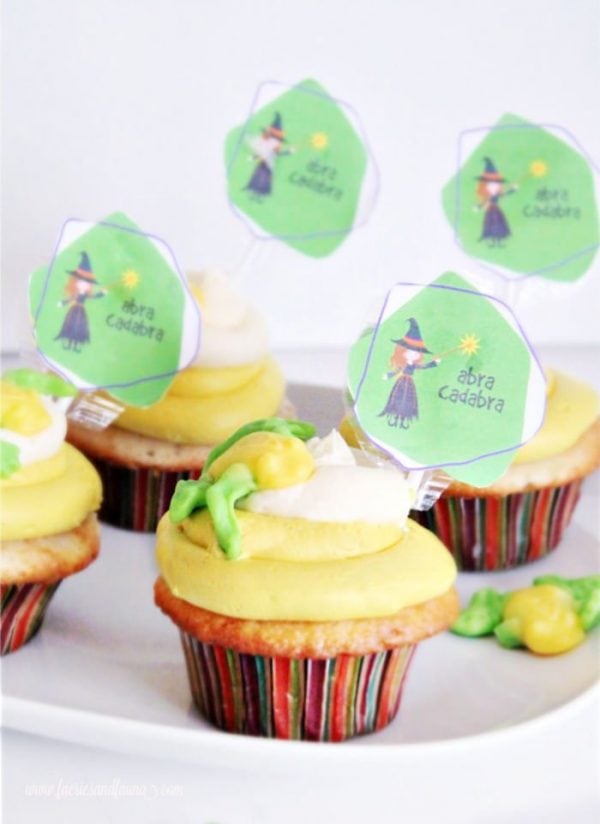